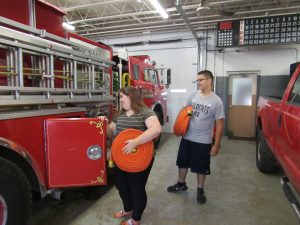 Homer Center high schooler Robert Scott volunteers with the Homer City Fire Department, just like his father and grandfather did before him. “It makes me feel good,” says Robert. “My grandpa and my dad did it, and I’m glad I did it too.”

Fellow high school student Ashley Gardner says the fire department is like a family – and not just because her father is the fire chief. “With volunteering, you grow up with the people here… I get to connect with people. If you see something happening and you see how people act and react to those things, you feel connected to them.”

Chief Terry Gardner knows how important these junior volunteers are to the future of his all-volunteer team. Terry’s station serves all of Homer City and most of Center Township, plus other neighboring communities. He estimates 90% of their calls are for structure fires. The force is made up of about 30 active volunteers. Many of them are senior citizens. “Without the volunteer force I don’t see how these small communities could sustain a fire department,” says Terry. “Just the hundreds of thousands of dollars it would cost to have people here all day at the station, it’s not feasible.”

Homer City’s story is similar to small cities and boroughs across the state, relying on unpaid volunteers to keep their communities safe. The Indiana County Fire Chiefs Association (ICFCA) has created a scholarship to reward those people – and maybe even get more people to sign up to help. The ICFCA set up a fund with the Community Foundation for the Alleghenies, which will give two $500 awards each year to college-bound students who are active in their community. 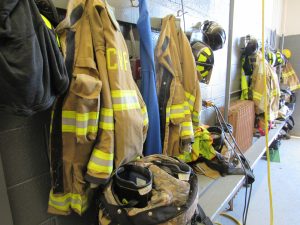 “Volunteers are the heart and strength of our Indiana communities,” says ICFCA President Melvin Benamati. “Our fire companies wouldn’t exist if not for the volunteers who show up to protect their friends and neighbors when that siren calls. We hope this award will put a spotlight on the great work being done by volunteers of all ages and abilities.”

Ashley and Robert both plan to go to college after high school – and they both plan to apply for the scholarship. As a parent with looming college tuition bills, Terry knows every little bit will help. “With the cost of education, if she would get it, it may cover her books for the semester or the year, and that’s a big relief.”

In addition to running the fire department, Terry works full time managing a local restaurant, and as an EMT. Fires don’t wait for dinner to be over, or for the end of your child’s school concert. The time to recruit volunteers is when they’re young, without the demands of work and family. Terry believes the scholarship can make a difference in getting more people to consider pitching in, not just at their local fire departments, but any community-building activity or organization that needs help. The reward is a stronger community. “These kids know we all have their backs,” says Terry.  “Not just in here, but in life.” 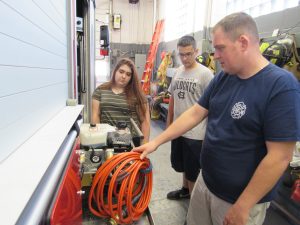 With this scholarship, Indiana County Fire Chiefs are adapting to changing demographics and interests, and preserving the ties and traditions of local, volunteer fire departments. Those ties and traditions keep thousands of people safe. They’re important to Terry, who learns from the past while preparing for the future: “Things are always changing. The day you stop being willing to learn is the day you shouldn’t do this anymore.”

If you’d like to support the ICFCA Scholarship Fund, you can do that here. Go here to apply for the 2019 scholarship.