MENU
A Life of Service

Lynn Ashe is known throughout Bedford County as a go-to community builder, who’s willing to do whatever it takes to help a worthy cause. Before she landed in Bedford, Lynn was a trailblazer in the highest reaches of government, traveling the globe with the Secret Service and the CIA, a key operative in creating a better world for us all.

Lynn is also a good friend to the Community Foundation for the Alleghenies. She volunteers her time and expertise as a CFA fund representative, member of our Bedford County Advisory Committee, and member of our Distribution Committee.

Hers is a story of great heart, tireless spirit, and dogged determination to be a force for good. It was beautifully captured by Bedford County Chamber President Kellie Goodman, in the most recent edition of Generations Magazine.

We found it so inspiring, we’re sharing it with you:

Lynn Ashe is on a mission. In fact, she is on many, but on this particular day, her goal is to educate members of a local service organization about the importance of knowing how to perform CPR.  With her lean frame and soft voice, the first impression may be deceiving, but inside this elegant septuagenarian beats the heart of a lion.

As she hands out spongy toy ambulances and begins to explain how to administer chest compressions to someone in cardiac arrest, her desire to impart this important knowledge is palpable. And then she proceeds to tell the group how she performed CPR on her own husband for an extended period of time as he was having this third heart attack; he did not survive, but she knows she did all she could.  She leaves the group with a call to action: she doesn’t want anyone to feel the guilt of not being able to do everything possible to save a life.

Community servant, compassionate confidante, committed philanthropist.  Lynn Ashe is all these things, and so much more.

Born and raised in Michigan, Ashe received a BA in Psychology from Detroit’s Wayne State University, spending her junior year studying in France at the Université d’Aix-Marseilles. She delayed postgraduate studies, she says, “to spend a couple of years seeing a bit of the world with the CIA…and stayed 26 years.”

An independent single woman of the 60’s, Lynn began her CIA career as most women did, in a secretarial role.  At the time, the idea of sending a woman overseas to work as a field officer was incomprehensible. But over time, her supervisors gained confidence in Ashe, and ultimately sent her for officer training when few women had the opportunity.

“It was partly because of a thick glass ceiling,” she said, “but also because many women were afraid and shot themselves in the foot.”

She became the first woman in the CIA assigned to, as she describes it, “take advantage of short-term opportunities to gather intelligence.”

Her assignment to this trailblazing post was so ceiling-shattering, congress was actually briefed on having a woman officer on a CIA entry team.

But the agency quickly realized the advantages to female operatives.  Around the globe, women’s roles were subservient and passive.  To insert a woman into a CIA team of men reduced suspicion. Lynn’s dream of traveling the globe came to pass.

“I would grab my passport and American Express card and take off for places in the world,” she said. “When asked where I’d like to go on permanent assignment, I requested Iceland. So they sent me to the Congo.”

Ashe served her country as a CIA officer in Africa during the revolution, in Paris during the student riots of 1968, and in Laos during the Vietnam War. Her only arrest came while on a social outing in the Congo, off-duty, and in the wrong place at the wrong time.  Separated from her companion in a militant jail, she feigned pregnancy to be reunited with her colleague, and was ultimately released unharmed.

Courageous, adventurous, and inclined to service: all traits that served her well in the Agency, and which she now puts to good use in her adopted community of Bedford County.

Lynn met her late husband, Craig Ashe, while working in France. He was serving as a Marine Guard at the US Embassy. They were both part of a group of American singles who would gather on Sunday evenings at Lynn’s Paris apartment, enjoying wine and singing along as friends played the guitar.

It wasn’t until years later that they would begin dating, and when she finally realized he’d gotten “under her skin,” she turned down another overseas assignment, and they were married, on Valentine’s Day 1977 in St. Mary’s Chapel at the Washington Cathedral.

“He knew me better than I knew myself – he was my rock,” she said. “When I was younger I thought I would never get married, that marriage was the end of things, but it wasn’t.  I was my own woman before I got married, but with him, I was freer, I was safer.  He was the best person I have ever known.”

While Ashe continued her work at the CIA, Craig had joined the Secret Service, both living in the nation’s capital. Their service to the nation entitled both of them to retire while in their 50’s. After being pressured by Arlington, Virginia neighbors to visit their weekend home in Bedford County, the Ashes fell in love with Central Pennsylvania, and moved to a farm outside of Breezewood in 1990.

They began the next chapter of their lives, lending their time and talent to an array of causes in their adopted community.

“Bedford County adopted us as well,” said Lynn. “This community was kind to us. We were young retirees, we still had some energy and our time was our own, and we could do anything that captured our hearts and our imaginations.”

They got involved in things they loved.  Craig joined the Bedford Rotary Club, and quickly became a respected leader in the community. He was instrumental in launching Bedford’s Sunrise Rotary Club, saying it was “good for the community and the right thing to do.”

Lynn has devoted her time in support of art, education, hospice, disaster relief, the hungry and victims of violent crime. She was instrumental in growing the Bedford County Arts Council and still organizes art exhibits in spaces throughout the county.  She was part of the effort to build the Allegany College of Maryland Bedford County Campus, helping thousands of local students become the first in their families to go to college. She contributed to launching the Chamber Foundation’s Leadership Bedford County program, which has graduated more than 220 professionals since 2001. She is often on call to comfort hospice patients and their families, and as part of the disaster response team for the Red Cross, among her many service endeavors.

“She, and Craig have had an incredible impact on Bedford County,” said Kay Reynolds of the Community Foundation for the Alleghenies’ Bedford County Endowments, and friend of the Ashes. “She’s tireless and relentless in pursuing her goals.”

Her father was a safe and lock man; one of his biggest customers being Ford Motors.  Her mother was a stay-at-home Mom, but also an avid volunteer.  A long-time member of the Red Cross Grey Ladies, she organized the Blood Mobile volunteers for Wayne County, Michigan, among her many volunteer roles.

“She was going to work at one point when I was 7 or 8 to save up for a piano,” said Lynn. “But she got sick before she went and Daddy said they’d find another way.  I still have that piano.”

And she still has that spirit of giving back to her community, of helping others and of volunteering her time and expertise to a greater good.

“The best thing about volunteering is that you can make a difference,” she says, “and you can see the results of your efforts, especially in a small community. We have to take care of each other and we should do what makes us feel worthwhile with no hope of recompense.” 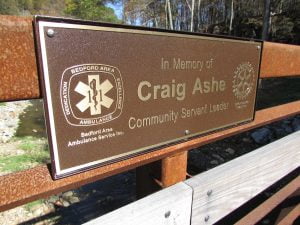 Her beloved husband passed away in 2005 leaving a void, not only for Lynn, but also for the community.  Last year, the Bedford Sunrise Rotary Club and Bedford Area Ambulance Association dedicated a bridge on the Heritage Trail for Craig Ashe, a lasting tribute to his legacy of service, and his special gift of building bridges between people and organizations.

“I joined the morning rotary because of Craig,” said Reynolds. “He had the most amazing influence. He had an energy that was reassuring, inspiring…it’s hard to put into words. They were the perfect couple – like bookends.”

“We were so lucky in so many ways,” she said. “He was one of those people who could disagree without being disagreeable.  I was 37 and he was 30 when we got married, so we should have died together.”

Lynn has carried on the couple’s commitment to their causes, making an impact that has rippled throughout the county and the region.  Future art galleries in Bedford’s Southern Alleghenies Museum of Art and the historic Russell House will bear the Ashe name, but perhaps the most important impact has been comfort provided to families in their final moments with a dying loved one; or food, shelter and compassion provided in the wake of a house fire or other disaster. And sometimes her passions meld with powerful consequences, like an art exhibit she compiled, created from artwork by child abuse victims.

This trailblazing woman who paved the way for generations of female agents within the Central Intelligence Agency, today, puts heart and soul into her volunteer efforts. Bedford County is the fortunate beneficiary of her passions.

“She has a way on a very personal level of being able to raise people’s spirits,” said Reynolds, “as well as on any project she’s working on in the community.”

“The threads of our lives interweave so much in a small community,” says Lynn, “and it’s our job to look out for one another. That’s what we’re here for.”

And when asked if she’d do it all again? She immediately replies: “Lord, yes!”