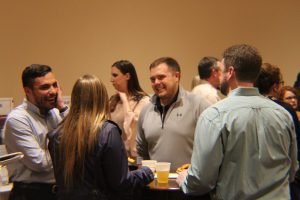 Johnstown’s Vision2025 gave its annual update, which included amazing progress. Within just two years, this framework to encourage and empower volunteerism in Johnstown has seen the creation of dozens of Capture Teams, which are already changing the face of the city.

The Community Foundation was an early champion of Vision, and continues this partnership as Vision’s primary provider of grant funding, which powers marketing and much of the Capture Team activity. We’re excited to pass along this report on the celebration, provided by the Vision2025 leadership team: 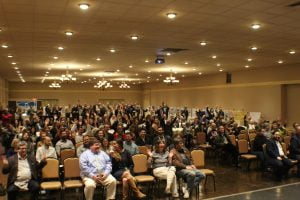 This year, we at Vision2025, wanted the annual celebration to be just what the name implies: a celebration, an event that would turn the spotlight on the amazing volunteers of Vision2025 and members of our community who strive to create a better Johnstown for generations to come. Without the efforts of these selfless individuals, there would be no Vision2025, so making sure they receive the recognition and support they deserve is a top priority.

From the minute the doors opened, a stream of people began flooding in and with each guest that came through the door, the electricity in the room continued to grow. Over 170 attendees began to circle the room taking in each of the 50 posters representing Vision2025 Capture Teams, community organizations, and completed projects throughout the area. At many of the posters were involved representatives, who were delighted to talk about the work they do for Johnstown, and explained how someone would be able to get involved with their project.

After getting to know the key change-makers in Johnstown, Bill Flanagan, Chief Corporate Relations Officer for the Allegheny Conference on Community Development, took the stage to serve as the keynote speaker for the night. While Bill has spent most of his time working in Pittsburgh, he immediately made one observation about Johnstown. “I have been following online what you all have been up to over the last couple of years. You’re moving at lightning speed compared to the way things have unfolded in Pittsburgh over the last 35 years.” Bill then took us through his journey of working in Pittsburgh to turn it into the city we all know today. Throughout the speech he made several correlations between Pittsburgh and Johnstown, and finished by offering parting advice:

“Keep up with the competition, work together, invest in technology and your people, and finally don’t fight change. The workforce is going to change over the next 5 to 10 years in ways that [none of us] can even begin to imagine. Keep an eye on the invention coming out of the universities right here at home. That is going to give you the tools and knowledge to put Johnstown in the position to prosper.”

“It won’t just happen… It’s going to take people with great ideas working together to make it happen.”

What projects do you have in mind? Go here to get involved.