JOHNSTOWN — The Community Foundation for the Alleghenies is excited to welcome a new group of interns for the third consecutive year of the Youth Philanthropy Internship program. Led by senior interns Ryan King and Mikella Buncich, this group of eight aspiring young leaders was selected from the graduating classes of local high schools in Bedford, Cambria, and Somerset counties. Thanks to generous grant funding from The Heinz Endowments in Pittsburgh, the interns will complete an eight-week program in which they will learn about philanthropy, community needs, and effective marketing techniques. They ultimately will make available two grants of up to $25,000 each for projects that are yet to be determined. The interns will announce requests for proposals on July 15, based on their own observations and assessments of community needs.

Tabitha Weaver is a 2015 graduate of Windber Area High School. She will be attending Chatham University to major in Political Science and Public Relations on a full scholarship. Tabitha was President of the Forensics team and advanced to the Octo-Final round at the National competition. She was also Secretary of the Technology Student Association where her On-Demand video team placed 5th at the National competition last year, and her digital video team won states and will be heading to nationals this year. Tabitha was also awarded the Challenge Program’s Community Service Award in both 2014 and 2015. Outside of school, Tabitha was named Queen Maple LXVIII at this year’s Maple Festival and is an intern with Inclined to Sing.

Leah Sprock is a 2015 graduate of Conemaugh Township High School who plans to continue her education at Miami University of Ohio to double major in psychology and marketing. She intends on becoming a novelist later in her life. In high school, Leah was a member of the soccer team and captain of the Forensics team. As a Youth Intern at the Community Foundation for the Alleghenies, Leah is determined to improve the areas around her by adding her own flavor through volunteer work. Leah is passionate about the issue of adolescent mental health and its relation to the drug and alcohol issues in this area.

David Saylor is a recent Conemaugh Township graduate. In the fall, he will be attending the Indiana University of Pennsylvania to major in Music Education with concentrations in trumpet and voice. David starred as Tevye in “Fiddler on the Roof” and as Shrek in “Shrek the Musical” with his school’s drama club. In 2015, David advanced to the NAfME All-Eastern Mixed Chorus in Providence, Rhode Island, and has advanced to PMEA Regional Band for the past three years. David has served as the President of the National Honor Society, the Senior Editor-In-Chief of the school newspaper and yearbook, and as drum major and Commanding Officer for Conemaugh Township’s marching band, and is Co-Captain of the Forensics Team.

Kate McGrath recently graduated from Bishop McCort High School and served as Senior Class President. Kate plans to further her education at Penn State as a marketing major. She wishes to become involved in Social Entrepreneurship to work towards a better community. Kate is enthusiastic about starting the internship! Growing up, Kate heard her dad talk about Johnstown and how great it used to be, so when she heard about the internship and the local impact it has, she knew she had to be a part of it. Kate hopes to improve the community by fixing up dilapidated buildings and garnering youth interest by promoting involvement on social media.

Hayden Spangler recently graduated from Christian Brothers Academy of Syracuse in May of 2015 and will be attending Temple University this fall to study Industrial – Organizational Psychology. In high school, Hayden was a Student Ambassador, a member of Key Club, and a part of the Yearbook committee. In 2012, she created the Westmont vs. Bishop McCort Blue Game and has donated over $6,000 for colon cancer research from the profits of the annual fundraiser. Hayden also volunteers at many outreach programs in her community through The Learning Lamp.

Mikita Hill-Cashaw is a recent graduate of Greater Johnstown High School. As a member of her school’s Interact Club, she ran various drives, donations, and runs while facilitating cooperation between organizations. She is excited to use her proactive attitude during her internship with the Community Foundation for the Alleghenies. Mikita applied for the internship because of her passion for community service. Next year she plans to travel to Brazil with the Rotary Youth Exchange Program before returning to study at American University in Washington, D.C.

Kylee Farabaugh recently graduated from Bishop Carroll Catholic High School. While at Bishop Carroll she was a member of the Drama Club for three years and a member of the National Honors Society. Kylee and her fellow politics class students coordinated the Mary Jo Butch Basketball Tournament to raise money for a scholarship that one senior received. Outside of school, Kylee spends time at her family’s farm in Carrolltown where she has various responsibilities dependent upon the seasons. In the fall of 2015, Kylee will continue her studies at Cornell University majoring in Agriculture and Life Sciences.

Joshua Wagner recently graduated from Bedford High School and is now beginning his journey as a “doer” in the community. Upon graduation, Joshua realized he wanted to do some good in his community before beginning his college career, thus his interest in the Youth Philanthropy Internship. He wants to do two things: work better in groups and foster student involvement. After showcasing his leadership abilities, which range from Class Secretary to President of TSA, it will be time to journey on and learn to follow with enthusiasm instead of lead with passion. Joshua will go on to Gettysburg College to pursue a degree in Chemical Engineering. 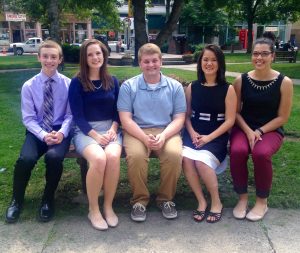 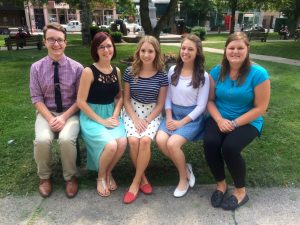