JOHNSTOWN — The team’s name, ‘Lady DirtBags,’ is not an accurate description of the girls who play on it, but it automatically catches your attention.

“We have an amazing environment for these girls that reinforce how having a positive attitude can make a difference,” said Matt Hoffman, Lady DirtBags Coach.

This travel 10U softball team started three years ago and was established as a sub-fund of the Community Foundation for the Alleghenies‘ Youth Leadership Fund. Their sub-fund is called the Lady DirtBags Youth Development Organization.

“This isn’t just a softball team,” said Hoffman. “These girls give back to their communities.”

Most of the 11 girls on the team have been together since it formed in 2012.

“These girls started out young, and learned how to grow as a team and improve individually,” said Hoffman. “These girls come from all different backgrounds and schools from throughout the area.”

The players are from six different schools:

Along with playing for the Lady DirtBags, all of the girls also play for other area Little League teams. What makes the DirtBags different? They volunteer as often as they can, mostly with the Johnstown Backpack Project in Johnstown, but that’s not all.

“We collect canned goods for the project, and next year we are hoping to add some more volunteer work to our service list,” said Hoffman. “These girls understand how packing these backpacks or collecting canned goods can make a difference in another kid’s life. They want to help out as much they want to play.”

In the team’s first year, the girls won two games. Now in its third year, they’ve won just about all of them.

“This team works hard both on and off the field,” said Hoffman. “We’re also probably one of the loudest. We support each other, cheer for one another, and work together to encourage everyone.”

Hoffman said the team likes to win, volunteer, and give back, but even more they care about one another. It’s not just about softball.

Hoffman said when it comes to birthdays or straight-A report cards, the team, coaches, and parents all make a deal about it.

“We’re encouraging one another in everything we do. That’s what makes us unique,” said Hoffman. “You don’t see the kind of atmosphere we have in today’s sporting world very often. People notice it, too.”

The team is growing each year. Hoffman said they hope to have two divisions in 2016: a 10U team and 12U team. Information about the Lady DirtBags, and sponsorship opportunities, can be found by clicking on softball.

The boys’ division, the “DirtBags,” didn’t have enough players for a team this past year, but hope to for the following season.

The girls may get dirty on the field, but Hoffman said they are an incredible group of young ladies. 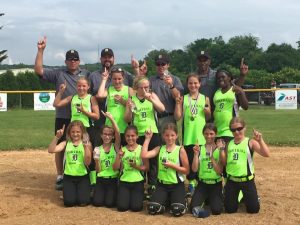