MENU
Inspiring Others To Give

JOHNSTOWN — Cuddles for Kids, a nonprofit charity through the Community Foundation for the Alleghenies, announced its winner for its 10th Anniversary t-shirt design.

“I was really happy I was able to do this for a good cause,” said Anthony Laiuvara, artist.

Anthony Laiuvara of Johnstown won the contest after submitting his drawing for the shirt.

“My nurse saw information about the contest on Facebook and knew I loved to draw, so I entered it,” said Laiuvara.

Laiuvara’s drawing may have won the contest, but it’s his story behind it that is capturing the hearts of everyone who sees it on social media.

“I thought it was great. I still can’t believe how he did it,” said Conner Hagins, Cuddles for Kids founder. “His letter touched my heart and obviously the hearts of the judges and voters.”

Laiuvara was diagnosed with Duchenne Muscular Dystrophy when he was four-and-half-years old. He lost his ability to walk at age 11 but drawing always kept him going.

18 years later, Laiuvara’s only voluntary movements are two fingers on his right hand.

“Just because I am disabled, it doesn’t mean I am unable to do things,” said Laiuvara. “I may be in a wheelchair but it’s not going to stop me from giving back or doing what I enjoy.”

The 29-year-old uses a computer to communicate; he used a free-hand drawing method, CoreFX, to create the winning design. It took him about three weeks to complete prior to submitting it along with a letter explaining his entry.

“He spent a lot of time on this and it turned out great,” said Hagins. “It shows what Cuddles is all about, helping others.”

“The picture just came together as I was drawing it,” said Laiuvara. “A person can do anything if they put their mind to it.”

The competition for the t-shirt design lasted about a month; 37 drawings were submitted. A panel of judges chose the top five designs on Easter weekend, and from there Facebook fans voted for their favorite. Laiuvara won with 167 votes. Hagins said he believes Laiuvara’s story about not letting his disability stop him from a passion is why he won.

“Anthony is an inspiration to us all,” said Hagins. “I am blessed to have his support for Cuddles.”

“I’m happy and privileged to use my talents to help out a charity,” said Laiuvara. “It’s something I always wanted to do.”

Hagins plans to meet Laiuvara in the next week to present him with a check for winning.

“I don’t know what I’ll do with the money. I am just blessed to be a part of the Cuddles family now,” said Laiuvara.

Laiuvara said he is just a guy who loves to draw and hopes his story will inspire others not to let their disability define them, but encourage them to never give up when it comes to giving back. 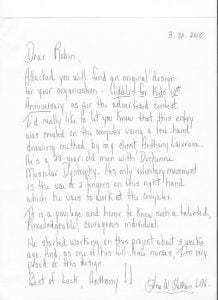