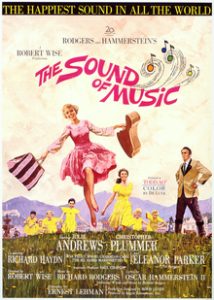 Bring the whole family to see The Sound of Music on the big screen, Wednesday, January 17th at 6pm

This is the next installment in the “Classic Movies in Johnstown” series, sponsored by the CFA’s Gella Family Fund.

This 1965 American musical film was produced and directed by Robert Wise, and starred Julie Andrews and Christopher Plummer, with Richard Haydn and Eleanor Parker. The film is an adaptation of the 1959 stage musical of the same name, composed by Richard Rodgers with lyrics by Oscar Hammerstein II. The film’s screenplay was written by Ernest Lehman, adapted from the stage musical’s book by Lindsay and Crouse. Based on the memoir The Story of the Trapp Family Singers by Maria von Trapp, the film is about a young Austrian woman studying to become a nun in Salzburg in 1938 who is sent to the villa of a retired naval officer and widower to be governess to his seven children.  After bringing and teaching love and music into the lives of the family through kindness and patience, she marries the officer and together with the children they find a way to survive the loss of their homeland through courage and faith.

The Sound of Music received five Academy Awards, including Best Picture and Best Director. The film also received two Golden Globe Awards, for Best Motion Picture and Best Actress, the Directors Guild of America Award for Outstanding Directorial Achievement, and the Writers Guild of America Award for Best Written American Musical. In 1998, the American Film Institute (AFI) listed The Sound of Music as the fifty-fifth greatest American movie of all time, and the fourth greatest movie musical. In 2001, the United States Library of Congress selected the film for preservation in the National Film Registry, finding it “culturally, historically, or aesthetically significant”.

For one night only, you can experience The Sound of Music on the silver screen. Sponsored by the CFA’s Fella Family Fund, The Sound of Music will be screening at the Westwood Plaza Theatre and Café on Wednesday, January 17th at 6:00 PM.