CFA is mourning the loss of longtime friend and supporter Bob Sweet, who passed away last month in Maine.

Bob was a founding member of our Bedford Advisory Committee, as well as a board member for many years, and fund representative for the Chestnut Ridge Christian Fund.

Bob used his platform as a successful business owner to support numerous causes throughout Bedford County, which benefited enormously from his energy, expertise, and compassion. He will be greatly missed.

Much thanks to the Bedford Gazette for letting us re-post the following remembrance of Bob, which ran in the September 29th newspaper. 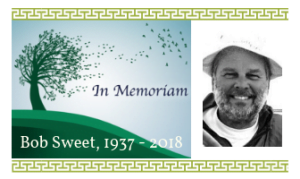 Bob was born on May 27, 1937, in Midland, Mich. At the young age of 15, he was stricken with polio just months before the Salk vaccine became available. Refusing the usual treatment of placement in an iron lung and transferring him to Sister Kenny Hospital in Los Angeles, Calif., his father made it possible for Bob to regain his strength to walk again, finish his education at college (now University of the Pacific in Stockton, Calif.) and go on to become a successful businessman.

In 1973, after working several positions with Dow Chemical and then Westinghouse Corp., Bob started Creative Pultrusions in Bedford to fulfill an order with General Motors Corp. for fiberglass dunnage bars. He used his own truck, materials he assembled and seven young employees, four of whom remain with the company today. From that small beginning in a garage, the company has grown over the years until it now employs 250 people and is a multimillion dollar business in Pleasantville.

Bob was always very involved in his community, sharing generously both with profits as well as his time as board member or leader of many organizations (Memorial Hospital of Bedford County, Chestnut Ridge School District, Bedford County Airport Authority, United Way, church, Bedford Rotary, community foundations). He even created the Chestnut Ridge Christian Fund to give grants to local church groups and scholarships to young students to further their education.

Because he felt a need to tell others the story of his fight and survival over polio, Bob made himself available as a speaker to many Rotary Clubs to raise money for their effort to eradicate the disease around the world. He was honored with many awards, notably Bedford Elks Citizen of the Year, University of the Pacific Distinguished Professional Service Award for alumni and, within his industry, he was inducted into the national Composites Institute Hall of Fame and named the global Pultruder of the Year by an international industry association.

Bob and his wife Margie loved to sail, and, in 1993, they launched their beautiful 43-foot Hinckley sailboat, Spirit Wind, which began a series of adventures at sea, along the coast of Maine and off shore to Bermuda, the Virgin Islands and the whole Caribbean Island chain. The couple retired to coastal Maine in 2008 after selling Creative Pultrusions to Hill & Smith Holdings of England. Bob slowly began to lose his mobility, but never his spirit. And now, that spirit and Bob are finally free to join many loved ones who’ve gone before him to be with Jesus. He will be greatly missed by all who knew him.

Sail on, beloved, under the wings of your mighty Creator.

Funeral services will be held Saturday, Sept. 29, 11 a.m., at Church of Our Father Episcopal Church in Hulls Cove, Maine.