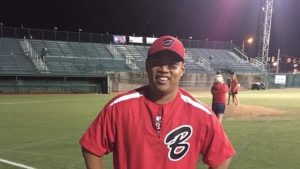 All his life, Luke Trotz made an impact wherever he went and in whatever role he embraced: as assistant director of student life and engagement at St. Francis University, where he was also director of esports and helped launch an esports facility; as a graduate and enthusiastic and beloved employee at Pitt-Johnstown; and as a proponent of esports who helped to establish local high school leagues.

Even when he was a young teen playing baseball in the Johnstown Recreation Pony League, he was known not only for his ability, but also for his concern for the team overall.

He was a true team player and he never lost sight of his passion for helping others succeed and grow. He cared about people around him and young people in particular, and he was always quick to make students feel supported and included.

His good nature and compassion were part of his background and engrained in his story, his cousin Jen Hagens said.

“Being adopted, he always has a love for helping other teenage kids,” she said. “He was everybody’s friend. He always treated his family like friends and his friends like family.”

For the past five years, Luke had worked closely with The Esport Company as it grew in the region. He even helped one of his former coaches establish an esports program at Greater Johnstown School District.

Now his family has established the Luke Trotz Memorial Scholarship Fund at CFA. Through the fund, they will further his legacy by awarding scholarships to Central Cambria High School graduating seniors who participate in the school’s esports program.

“He always had a love of computer games,” Hagens said. “He’d been working to start esports teams in different schools, and because he was a graduate of Central Cambria, we wanted to honor him by creating a scholarship opportunity there.”

In addition to his wife, Samantha E. (Makin) Trotz, Luke is survived by many loving family members and friends who will miss him dearly.

“He had such a sense of pride for his community and anything that he was a part of. He spent countless hours helping form esports teams and leagues so that he could share his love for gaming with local kids,” Hagens added. “We know how much he loved gaming and that he wanted to share his joys and passions with everyone. He was all about making sure everyone does what makes them happy.”

The fund also can accept gifts in Luke’s honor. CLICK HERE to find out more or make a donation.