Saturday’s Kitchen is known throughout Johnstown for providing weekend meals to people with nowhere else to turn. Every Saturday and Sunday, about 200 people – elderly, homeless, and low-income families – find food and fellowship with Joan Bost, who started the program 10 years ago.

Saturday’s Kitchen is having an impact far beyond its weekend home. Through a fund at the Community Foundation, the organization provides grants to 24 food banks in and around the greater Johnstown area. Collectively, they feed thousands of people.

Joan says she was simply overtaken with the number of food banks in our region, and felt compelled to include them in her operation. “There were so many pantries and so many people in need. It was overwhelming. Overwhelming.”

Many of those pantries are in Somerset County, and one of them is the Helping Hands Food Pantry in Boswell. Helping Hands volunteers purchase, pack, and distribute food to about 215 families a month, 75 of which are elderly. They provide 165 weekend backpacks plus hygiene supplies to children throughout the entire North Star School District. They make deliveries to people who can’t get out to get it themselves. There’s also a Helping Hands thrift store, which supports the food supplies. It’s an enormous operation, with 70 volunteers, and no paid staff. Georgia Sheftic oversees it all. “There’s a need out there,” says Georgia. “You may not see it, but there’s a need.”

Helping Hands receives support through the Greater Pittsburgh Community Food Bank, plus they get food from Wal-Mart, Giant Eagle, and Aldi. Local businesses pitch in. There’s some government support, too. It’s never enough to help everyone who needs it. Georgia is piecing together every dollar she can find, to reach as many hungry people as possible.

Helping Hands received $600 in November from the Saturday’s Kitchen Fund. That’s enough for over 100 backpacks, which means that many children will get to eat something nutritious over the weekend. Without it, they might not.  “The most annoying thing to me is when someone wants to know ‘where are the parents, where is the father?’ That’s not for me to judge. These children need help. Don’t judge it, just do it.”

At the same time, other food banks in Somerset County also got funding from Saturday’s Kitchen: $400 to the Windber Area Food Pantry, $450 to the St. Francis Sharing & Caring Food Pantry in Davidsville, and $500 to the Hooversville Food Pantry. In addition to that, the fund gave out a combined $17,000 to twenty food banks in Cambria County. 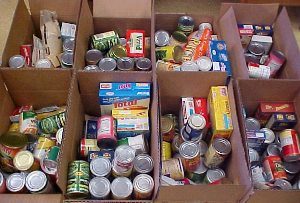 They all share a similar story. Resources stretched thin, in regions with higher-than-average poverty rates that mean higher-than-average numbers of families going without regular meals. One by one, nonprofits are collaborating across county lines to put food on those tables.

Joan Bost says it’s gratifying to see her program spread. “Christ taught us to help one another, and that’s what we’re doing in Saturday’s Kitchen. I’m not saying it’s easy, but you know what? I got far more out of it than I ever put into it.”

Georgia sees it touch people’s lives. “It’s just something I do, because I think I should. If I were in that predicament, I don’t know what I’d do… I know people are grateful. I get a lot of thank-yous.”

If you’d like to help, go here to support the Saturday’s Kitchen Fund.