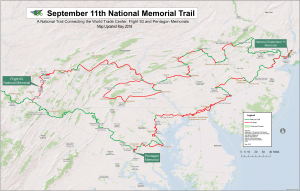 A second public meeting to gather community feedback on suggested bicycle and walking routes through the city and some adjacent areas will be held at 6 p.m. on Tuesday, July 17 at Bottle Works Arts on Third Avenue in Johnstown.

The Johnstown Urban Connectivity Plan is being developed by Cambria County Conservation and Recreation Authority to identify the best options for bringing the September 11th National Memorial Trail and the Pennsylvania Main Line Canal Greenway through Johnstown.  These routes intersect in the downtown.  They will provide safe and attractive ways for local residents to walk and bicycle between neighborhoods and out into wooded areas such as the existing Path of the Flood and Jim Mayer trails.

About 40 people came to the first public meet held May 9 to offer suggestions for walking and bicycling routes.  In the upcoming meeting, many suggestions from the first meeting along with some other options will be shown on maps and people will be able to provide feedback on which options they think would work best.

The September 11th National Memorial Trail connects the former World Trade Center site in New York City to the Pentagon near Washington, DC, and the Flight 93 National Memorial in Somerset County.  Between Flight 93 and New York, it will come through Johnstown, providing a great opportunity to attract visitors who will stay overnight and spend money in the community.

The Main Line Canal Greenway is being developed to connect Pittsburgh and Harrisburg, and part of the Greenway from Johnstown through Hollidaysburg will use the same route.  The Urban Connectivity Plan will use existing trails, including the Path of the Flood Trail, Jim Mayer Riverwalk Trail and the Cambria Iron Trail that connects the downtown to Cambria City.  The Main Line Greenway will go through Johnstown’s West End and Conemaugh Gap.

The authority is developing the plan with grants from the state Department of Community and Economic Development and the Department of Conservation and Natural Resources. It hired Laird Recreation and Land Planning of Roaring Spring as the prime consultant on the plan, which will also address streetscapes, identify ways to calm traffic and reduce conflicts with commercial and industrial traffic to make these nationally significant trails attractive, safe and functional.

In addition to providing a major economic boost through tourism, these trail connections will make the city a far better place to walk and bicycle, providing alternative means of transportation and encouraging residents to adopt active lifestyles that are more healthy lifestyles. The recommended in-town routes are taking into consideration their mutually beneficial impact with the economic development of both new and historic structures. Measures are being recommended to make these selected streets very pedestrian and bicycle friendly, and “continuously interesting.”

This planning project will also look at the feasibility of connecting the Path of the Flood at Mineral Point with the Ghost Town Trail in Nanty Glo.

In addition to serving as the prime contractor on the Johnstown Urban Connectivity Plan, Laird Recreation is a subcontractor to Campbell-Thomas & Co., a Philadelphia planning and architecture firm, currently investigating the best and most feasible options to connect Flight 93 Memorial to Johnstown.  Other subcontractors of Laird Recreation are FisherWorks Consulting of Somerset and CDI-Kimball Engineering of Ebensburg.