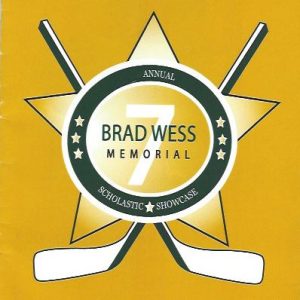 Friends, family, students, and hockey lovers come together on March 18th this year to honor the life and memory of Bradley Wess, with the Brad Wess Memorial Hockey Scholarship Showcase. The memorial hockey game will be played at the Cambria County War Memorial from 3-6pm, prior to that night’s Tomahawks game.

Brad died in a car wreck ten years ago. The 16-year-old Forest Hills High School student was an avid hockey player, who planned to go on to college to study engineering. His family created the Brad Wess Scholarship Fund with the Community Foundation for the Alleghenies to celebrate Brad’s life and establish his legacy.

The memorial hockey game is an annual fundraiser for the scholarship, which is awarded to two-to-three students every year. Scholarship winners are announced at the game.

Seniors form 13 schools are invited to play this year. Organizers have had such an overwhelming response, they plan to add an extra quarter onto the game to accommodate the large number of players.

Tickets are $5 at the door. The Johnstown Tomahawks have donated the rink time, so all proceeds go into the scholarship fund.