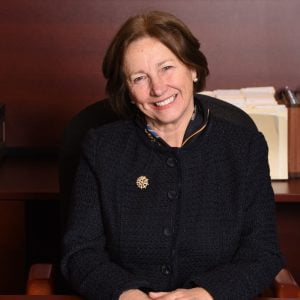 Passionate, tenacious, and energetic–three words that can best be used to define Bette Slayton, the president and CEO of the Bedford County Development Association (BCDA). The Community Foundation for the Alleghenies (CFA) announced that Bette Slayton will join the Board of Directors in February.  “We are very excited to add Bette’s expertise and energy to our board,” said Mike Kane, president and CEO of CFA.“

Born and raised on a farm in Wisconsin, Bette learned the value of hard work at an early age. She credits her leadership ability to 4-H and her work ethic to her incredibly supportive parents. Bette holds a Bachelor of Science Degree in Agricultural Economics from the University of Wisconsin, and did graduate work at Montana State University.

When asked how she ended up in Bedford County, she said, “I was a banker in Kansas City when, in 1984, I followed my heart to Bedford to marry Paul Slayton. Paul had relocated to Bedford from Kansas City to manage the 2,000-acre, nationally acclaimed Falklands Farm in Schellsburg. After eight months of long-distance dating, we married in May 1984 and I moved to Bedford. We now own Slaytons’ BearDance, a 320-acre beef cattle farm (registered Herefords) located in Dutch Corner, Bedford County.”

Bette is celebrating 33 years with BCDA. She began her career in 1990 in the Bedford County Office of Economic Development. Bette leads development activities in the county, including supporting and encouraging new businesses to move into the county and existing firms to expand. Her accomplishments include the $120 million restoration of the Bedford Springs Resort, the recruitment of the Walmart and REI Distribution Centers, CaptiveAire, and Green Leaf Medical. Prior to coming to BCDA, she was director of development finance for the Southern Alleghenies Planning and Development Commission, and was assistant vice president of the Mark Twain Bank in Kansas City, MO. Bette served from 2001-2002 as the president of the Pennsylvania Economic Development Association and currently serves on a number of statewide economic and workforce development boards and committees.

Bette resides in Bedford and lists her immediate family as husband Paul, 50 cows, 3 dogs, 8 cats, and her very healthy 100-year-old mother who still lives on the farm in Wisconsin.